Ride On, Lectra: Kubotek3D Bids Farewell to a Piece of Electric Vehicle History 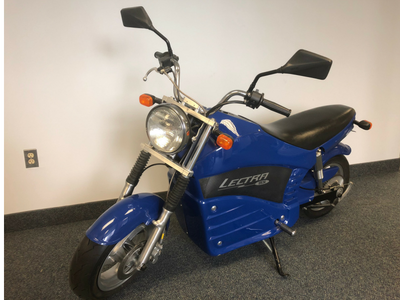 Last month a piece of our company history rolled out of the door, off to its next adventure. The 1999 EMB Lectra VR24 electric motorcycle that has greeted visitors to our office lobby for nearly two decades has been gifted back to the man who designed it, EMB founder Scott Cronk. The bike is serial number 23 from the first 100-unit production. How did it wind up in our lobby? The CAD used to design the Lectra was KeyCreator’s predecessor, CADKEY, and for the Kubotek3D team the bike has long symbolized the innovative spirit of our 3D CAD software.

Lectra may not be a household name nowadays but its story captures the resurgent interest in electric vehicles in the 1990s, a movement that led directly to today’s world where charging stations and fully electric cars are an increasingly common sight. Long before companies such as Zero, Victory, and Harley Davidson began to present a cool, modern alternative to the roaring-hog image of the motorcycle, there was the EMB Lectra. Produced between 1996-1999, it was both a defining build for electric bike enthusiasts and a glimpse into the future.

As our special “CADKEY blue” Lectra quietly glides down the highway into the hands of an eager devotee, it’s worth reflecting for a moment on its place in history. Electric vehicles have been at the forefront of innovation for nearly two centuries. Robert Anderson’s 1835 electric carriage pre-dated Benz’s petrol-powered car by 50 years (for the brave traveler, a hydrogen-powered car came before both – yikes!).

The early decades of commercial automobile production saw competing technologies, both electric and fossil fuel-powered, vying to determine the shape of transportation to come. In time the proliferation of Ford’s Model T, the convenience of the electric starter/combustion engine combo, and the demand for long-range mobility insured that gasoline would be the fuel of the 20th Century.

…But will it be the fuel of the 21st? As the last century wore on, ideas from the early electric car days continued to spark new innovations among inventors grappling with a new paradigm that was unsupported by infrastructure and looked at with mild amusement by most. Cronk’s electric motorcycles, with their range of 30 miles per charge and top speed of 51 mph, were destined to be celebrated by a small group of hobbyists rather than fill the roadways. But what was novel in the 90s (Lectras were even featured as prizes on Wheel of Fortune) now looks downright prescient. The innovations at the core of the Lectra plot a through-line to the LEAF, Bolt, and Tesla of today.

It’s not surprising that CADKEY was Scott Cronk’s design tool of choice for the Lectra. One of CADKEY’s, and its successor KeyCreator’s, main innovations is direct modeling. The CAD software is literally unbounded by history, encouraging designers to evolve their ideas by enabling limitless tinkering and repurposing of CAD data. Can the tool inspire the creator? There’s certainly a rich debate to be had there. One point there’s no question about: we’re proud that our software helped bring Scott Cronk’s vision for the Lectra to life.

Adam Halterman is the Brand Manager for Kubotek3D.